Once we finished up at the Grand Canyon, we drove to Sedona, AZ.  Sedona is an awesome little town that completely caters to tourists.  There are a wide variety of restaurants, breweries, artist shops, souvenir stores, and lots of other pleases to spend your time.  We took a Pink Jeep Tour which was a ton of fun.  They have an area in the surrounding countryside that they maintain and thus have exclusive access for their tours.  A guide takes you through the trails while providing you the natural history of the area.  It isn’t cheap but worth it in my opinion.

There are a multitude of hiking trails outside of the center of town.  One of the best is Cathedral Rock.  It was only about four miles round trip but the last 1/2 mile or so was very steep.  We went most of the way as a family but my wife and kids didn’t attempt the last piece as it required a fair amount of hand over hand climbing.  The map at the trailhead showed the area very well – a quick picture of that and we were on our way.

Growing up in New England, I found the desert terrain around Sedona very foreign.  It was dry, but rather than an arid, hot, barren landscape, it was filled with a wide variety of vegetation.  We brought a fair amount of water and drank most of it even though it wasn’t overly hot – definitely recommend bringing more than you think you need.  There wasn’t much elevation to speak of until the last .4 on the map.  The trails were well maintained and received a lot of foot traffic so they are well worn.

The trails are flanked on both sides by a variety of scrub pines, cactus, sage, and other desert plants.  The soil is tinted red by oxidation of iron (rust) – it isn’t clay.  The trail proceeded along a small river (which contributed to all the plants).  It was a great little spot and my kids enjoyed the cool air and shade by the water. 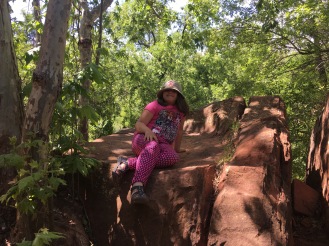 The trail proceeds up to the base of Cathedral Rock and goes from fairly level to steep very quickly.  It doesn’t actually lead to the top of Cathedral Rock (that would take some technical rock climbing) but rather to the saddle between Cathedral Rock and an adjacent rock formation.  The way up isn’t too hard but was daunting for my little ones.  The views from the top are amazing – you can see the valley stretched out before you.

I had a lot of fun with the pano feature on my phone.  It helped to capture the 360 degree view that greeted you at the top.  I was very glad that it was a nice clear day so that I could see out across the landscape.  All in all it was a great quick hike that I would highly recommend if you are in Sedona.  It can be done in a couple hours and isn’t too strenuous except for the last part. 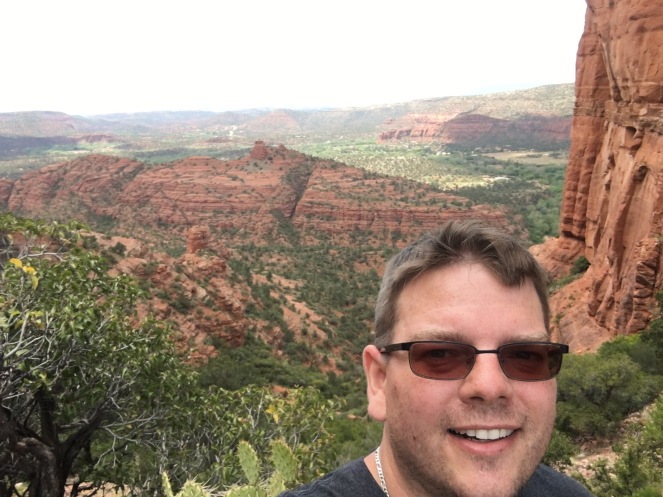 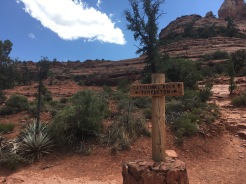 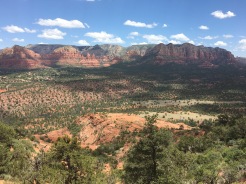